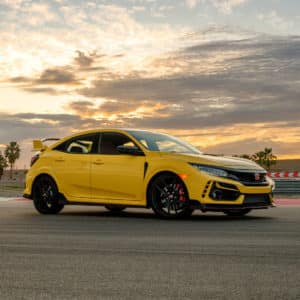 The 2021 Limited Edition Civic Type R in Phoenix Yellow. As fun as it is jaw-dropping

Just in case you missed the news, the Honda Civic Type R Limited Edition is turning heads and breaking records. The 2021 Phoenix Yellow Limited Edition Type R officially claimed the title earlier this year of the fastest front-wheel-drive car on Japan’s Suzuka Circuit. Super GT Series driver, Takuya Izawa, recorded a 2 minute, 23.993 second lap time during the second lap of the Type R’s final performance tests back in February.  We knew the stunning 2021 Limited Edition Honda Civic Type R was easy on the eyes, but who could have ever guessed this 306-horsepower, 2.0-liter turbo I4 engine hatchback was so mean on the track?  Well… I guess, actually we could have.

The previous record holder, the Renault Megane RS Trophy-R, was usurped on the leaderboard by a jolting phoenix yellow streak as the Type R Limited Edition surpassed it by about 1.5 seconds.  Honda’s unofficial goal in creating the Limited Edition was to win back the title of the fastest front-wheel-drive car at the Nürburgring Nordschleife in Germany. We will have to wait and see if the Limited Edition type R can take down the current Nordschleife FWD champ, the Megane RS Trophy-R; but, unbiasedly, here at Buckeye Honda, we like its chances.

But let’s take a look at what makes the Honda Civic Type R Limited Edition so special. Unchanged from the standard Type R, the Limited Edition also carries a 306-horsepower, 2.0-liter turbo I4 engine. However, it has seen a few upgrades, including:

Something Big is Happening at Buckeye Honda…

Another fun fact – the Civic Type R Limited Editions come in only one color – phoenix yellow. The U.S. will only receive 600 out of the 1,000 Limited Edition Type R’s being produced.   Almost as rare as it is dumbfoundingly quick on the track, this brings us to another teaser only those that read to this point will see (for now).

Buckeye Honda has officially received ONE of the 600 units coming to the U.S., and will be auctioning it off with a special cause in mind.   All bids over the listed auction price will be donated to the Children’s Heart Foundation and Pelotonia; meaning this incredible vehicle will ultimately benefit an even greater goal.  Even if you aren’t planning to participate in the auction, we invite you to come check out the Buckeye Honda showroom at 2615 N Memorial Drive, Lancaster, Ohio, where this 1/600 2021 Limited Edition Phoenix Yellow Honda Civic Type R will be displayed until its late August auction date!  More info to come soon…