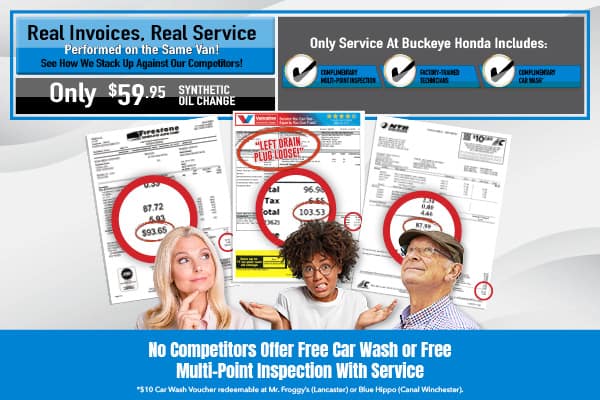 We compared three competitors’ oil change prices vs ours.

The results may SHOCK you!

Why pay more for less?  Dare to compare!

What We Set Out to Do

This wasn’t an excess of confidence, these aren’t fake numbers, and this isn’t a smear campaign against our competitors. These were one-on-one, put-your-money-where-your-mouth-is, head-to-head comparisons. Why? Because we knew this:

Buckeye Honda combines the highest quality automotive service experience in the Central Ohio area with the lowest cost service in and around Lancaster. (Or, for that matter, just about anywhere!)

And we set out to prove it.

The recipe for this particular dish of truth would call for the most detailed list of ingredients in our entire cookbook:

We used the same van and designated three of our strongest competitors to challenge us in figuring out the lowest cost for an oil change in Lancaster.

The only twist? They didn’t know it was coming. But in the spirit of fairness, the Buckeye service team was kept in the dark.

Without going into great detail, our mystery shopper went to great lengths to assure complete anonymity—the fake mustache wouldn’t stay on, so we tried glue, and let’s just say mistakes were made—no one except the mystery shopper knew the exact plan, only how to go about their business in the service departments like it was any other day.

In our effort to determine how one of the nation’s largest automotive service providers stacked up to our hometown experience, Valvoline was first on the list of competitor oil changes. This is one of those times we think we should let the invoice do the talking:

Not only was our mystery shopper absolutely floored at such a high bill, but what they learned at their next stop would leave our jaws on the floor.

Firestone, one of the more popular giants of the oil change industry, recently opened a store in Lancaster, but we weren’t about to back down to anyone. We wanted to square up and lay it all out on the line, and so we did.

$93.65 for a full synthetic oil change on a Honda Odyssey Elite. They did, however, fix the leaking drain plug left by the Valvoline technicians from the day before. (Shown in the graphic.)

That’s right! Our mystery shopper was approached by a Firestone technician not long after arriving, informing him that our Honda Odyssey had pulled into their service bay leaking oil like a sieve. Yikes!

Even though NTB reflected the lowest price of all Buckeye Honda’s competitors in the Lancaster area, keep reading until the end. We’ve most certainly saved the best for last. Our invoice from NTB was:

$87.99 for a full synthetic oil change on a Honda Odyssey Elite.

With our mystery shopper nearly out of money, it was time to run the Honda Odyssey Elite through our own service department.

Again, to make the test fair and accurate, the Odyssey was brought for service under the precedent that it was just a run-of-the-mill van that had been picked up and dropped off for an oil change, a vehicle owned by someone with seemly no connection to Buckeye Honda.

$59.95 for a full synthetic oil change on a Honda Odyssey Elite at Buckeye Honda, with a complimentary multi-point inspection conducted by factory-trained technicians. And the icing on the cake? The Buckeye service technicians even threw in a complimentary car wash.

Looking at these results, we think the reasoning behind Buckeye Honda’s daring to compare is obvious.

The next time you need automotive service in Lancaster, Columbus, Logan, Newark or the Central Ohio area and want the best quality care and lowest pricing, schedule your appointment at Buckeye Honda.

Schedule today and dare to compare!