Buckeye Honda Racing at the NASA Championships in Daytona Recap

The Untold Stories of Competition

On February 22, 1959, Lee Petty defeated Johnny Beauchamp in a photo finish at the just-opened Daytona International Speedway in Florida to win the first-ever Daytona 500. While a 10-second Google search for “first-ever Daytona winner,” may identify a clear winner for any curious browser of the long history of the Daytona Speedway, looking at the podium photos rarely ever illustrates the entire picture. Beauchamp was initially named the winner, but Petty challenged the results and three days later, with the assistance of photographs from newspapers, he was officially named the champ. Once again, 22,855 days later at the very same track, an epic story unfolded that may go unbeknownst to most unable to witness, but will stick with everyone involved forever.

The Road to Daytona 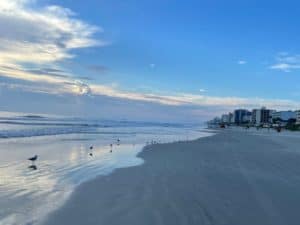 On a rainy Friday morning the day of September 17th, the members of the Buckeye Honda Racing Team loaded aboard a plane on the tarmac of John Glenn International Airport.  While some of the crew had already arrived in Daytona, the remaining associates were seated eagerly with some members even traveling by air for the first time.  The excitement grew as, after all, it was not yet two years since majority of the same group had participated and gone on to win the 2019 NASA Championship (STI-4 Class).  A year of waiting in the stables, champing at the bit as COVID-19 cancelled the 2020 races, had every member ready to hit the asphalt; all sharing the common goal of crossing the finish line leading the pack and repeating the championship season.

Our Buckeye friends knew that the road ahead would be harder then ever before as many setbacks and complications seemed to bombard the team throughout the entirety of the season.  There were various obstacles that stood before them even before the car was within a state of the checkered flag.  Every person involved with the mechanical workings of the vehicle practically travelled down with a wrench in one hand and spare part in the other, but were primed to meet every challenge with unrelenting determination. 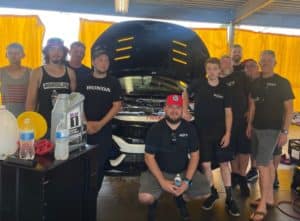 Power of the Team in action

What were the aforementioned challenges? In the span from Friday up until minutes prior to lining up in the starting position Sunday: two engine failures (the first requiring an engine swap, the second a reconstruction by using parts from both), extra hours of physical work put in by every team member and new questions popping up that the team had yet to work with hands-on in their professional careers.

Getting the Backup, but Never Backing Down

Fans of sports outside of racing may clamor for the backup when lesser incumbent starters struggle (depending on the situation).  Rookie QB’s may sell the most jerseys in a home-crowd while the veteran journeyman penciled in as QB1 can only try his best to perform to his limited capabilities until the noise becomes too much.  While parallels exist between the gridiron and the race course, the hope of replacing any starting part of a car with a backup is an absurd request.  For the Buckeye Racing Team however, it was just another day at the office.

Our Buckeye Family not only rose up and faced what most would consider overwhelming adversity, the Team was the first to arrive every day at the track, the last to leave, and the hardest working Team the whole entire time between.  It was the gratification of getting the race car on the track that immediately felt good that day, but it is the lessons learn, relationships built and memories made that will stand out from this Daytona trip forever; truly embodying what Power of the Team is all about. 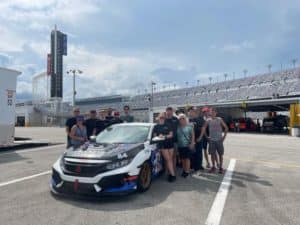